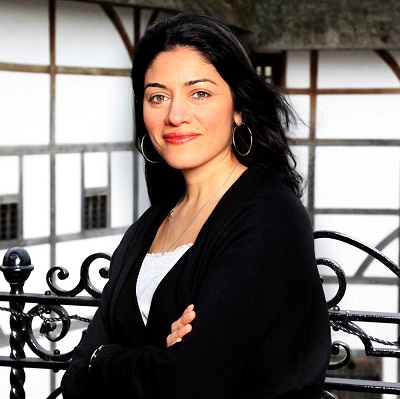 Farah Karim-Cooper is Professor of Shakespeare Studies, King’s College London and Co-Director of Education at Shakespeare’s Globe, where she has worked as Head of Higher Education & Research for the last 16 years. Farah is President of the Shakespeare Association of America (2021-2022) after having served three years as Trustee.

She is on the Advisory Council for the Warburg Institute, a Trustee of the Lyric Hammersmith and is on the Council of the Society for Renaissance Studies. She has held Visiting fellowships around the world. She leads the architectural enquiries into early modern theatres at Shakespeare’s Globe, overseeing the research into the design and construction of the Sam Wanamaker Playhouse, the Globe’s indoor Jacobean theatre.

She has published over 40 chapters in books, reviews and articles and is a General Editor for Arden’s Shakespeare in the Theatre series and their Critical Intersections Series. Her books include: Cosmetics in Shakespearean and Renaissance Drama (Edinburgh University Press, 2006, revised ed. 2019) and The Hand on the Shakespearean Stage: Gesture, Touch and the Spectacle of Dismemberment (Arden 2016). She has also co-edited Shakespeare’s Globe: A Theatrical Experiment with Christie Carson (Cambridge University Press, 2008); Shakespeare’s Theatres and the Effects of Performance with Tiffany Stern (Arden 2012) and Moving Shakespeare Indoors: Performance and Repertoire in the Jacobean Playhouse with Andrew Gurr (Cambridge University Press, 2014); she recently edited a collection for Arden, Titus Andronicus: The State of Play (2019) and has edited John Webster’s The Duchess of Malfi for the Routledge Anthology of Early Modern Drama, edited by Jeremy Lopez (2020). She is currently writing a book on Shakespeare and Race.

In 2018 she curated the Globe’s first Shakespeare and Race Festival. She is an executive board member for RaceB4Race, a collective of Scholars and institutions that seek racial justice in the field of pre-modern literary studies. In the UK she is creating the first ever Scholars of Colour network.